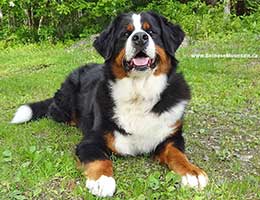 This is our Dam Elisa

Elisa came to us from Germany in September 2014. There are a lot of champions in her German and Dutch bloodline.
Elisa is an extremely loving and willing dog. She is like a shadow to us and she is never more than a couple of feet away, even while hiking our woodlot without a leash. She loves it to lie down on our raised deck overlooking the whole yard. She is the Queen on our yard! More information about Elisa or to her pedigree you will find here. 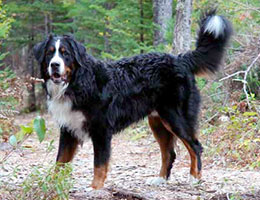 We are deeply saddened to announce the sudden passing of Moritz.
Moritz was born in Saskatchewan at Swiss breeders and he came to us in 2009. Moritz always tried to be the first if it is about welcoming visitors or exploring something unknown. Moritz was very outgoing, very friendly and he was everything but shy! Moritz was the king on our yard! Thank you so much for the wonderful 9 years we had together! 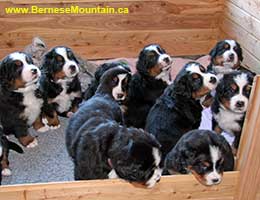 Announcement
Elisa and Rueger have celebrated their "honeymoon" at Easter 2018. Depending on what Mother Nature will decide, we hope to have our next litter about June 1th, 2018.
Sire: MBIS MRBIS AM CH/CAN GCHE x Belnois Locked N ‘ Loaded RN CGN BG #: 108448
As soon we know details it will be posted here. More information about the process and  requirements you can find here.

For Sale by Owner

near beach at Iona at Bras d’Or Lake, open and sunny property with panoramic view, south faced, more information here or have a look at aerial video here 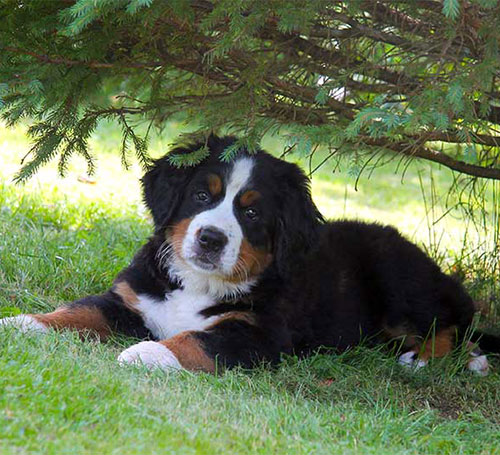 Elisa and Rueger have celebrated their "honeymoon".
If everything goes well we hope to have our next litter this spring.
Depending on what Mother Nature will decide, this will be about June 1th 2018.
We do not know more details at this point.

Please refrain from calling us for an exact date or for more information.
As soon we know more details, it will be posted here and on our Facebook page.
Thank you very much for your understanding and for respecting our privacy.
Our policies and what it would take to provide a new home for one of our puppies can be found under >Berner Puppies<.

You are welcome to send us your e-mail with your information to show us your interest in a Bernese Mountain Dog puppy.

We are member of:

in the heart of Cape Breton Island,

at the Shore of the Bras d'Or Lake.

Although many herbs  are used based on anecdotal evidence, some have been tested and scientific proof exists to recommend them in dogs.

For example, valerian root, marketed either alone or with other herbs, is' used to combat nervousness. Nicknamed "herbal Valium," it reduces stress and anxiety by altering brain GABA (gamma-amino butyric acid) levels.

Valerian appears safe - a six-month trial of valerian, passion flower and hawthorn berry showed no toxicity in dogs. However, it should be used carefully with other sedatives and in dogs undergoing anaesthesia, in case it augments effects of the drugs.

Ginger has a long history of use as an anti-emetic in people. In dogs, it is proven to reduce vomiting in patients on chemotherapy.

Boswellia is found in several canine products designed to treat arthritis and inflammatory bowel disease. Its anti-inflammatory effects can offer significant clinical improvement; however, although it has no reported interactions with other medications, it can cause nausea and diarrhea.

Ginseng is a fascinating plant with several species having their own chemicals and specific effects.
Panax ginseng, combined with brewers' yeast, has demonstrated significant positive effects both mentally and physically in geriatric dogs.

Korean red ginseng improved liver function and accelerated regeneration of the liver in dogs that had under gone partial hepatectomy (removal of part of the liver).

A medication called Yunnan Paiyao is sometimes used by veterinarians to lower the incidence of catastrophic hemorrhage in dogs with blood-based tumours on their spleens. Pseudoginseng root is the main ingredient, used for its high concentration of hemostatic  (blood-clotting) constituents, Though used extensively  for this purpose, the only study performed in dogs was one designed to show its benefit in pyometra.
Though it helped, this did not substantiate its ability to promote blood clotting. Echinacea has received immense media attention for  its immune-stimulating properties.

Asian mushrooms have been touted as immune boosters that help dogs fight off cancer.
Added to chemotherapy, medicinal mushrooms reportedly helped improve quality of life.
The study did not determine if  the immune-enhancing properties of the mushrooms had any effect on the chemotherapy. Along with a lack of data for many herbs, there is always a concern about toxicity.

For example, comfrey and pennyroyal can both be poisonous.
Alpha lipoic acid (ALA), which has been promoted for use in an array of ailments, including neuropathy and diabetes, has caused dogs and cats to appear at emergency centres due to its toxicity.

Natural does not always mean safe.

Copyright 2014 © Roland Moeller
All material, including but not limited to, pictures and programming code, are protected by United States copyright law. Unless otherwise indicated, these are the property of Roland Moeller and may not be used without the prior written permission of Roland Moeller.